Quinoa might seem like a passing fad for some but according to Nutrition Australia's new food pyramid it is here to stay.

After 15 years Nutrition Australia has given their Healthy Eating Pyramid a new look, adding some "trendier foods".

The pyramid has been updated to represent the findings from the 2013 Australian Dietary guidelines. It now offers a clearer picture of the core food groups we should be eating, including removing sugar and giving grains their own shelf.

Dr Joanna McMillan said: "Overall I think it's great, it's an improvement on the previous one that was quite old by now and needed a bit of updating."

Hover mouse over the image below to see recommended serves per day for kids of all ages. 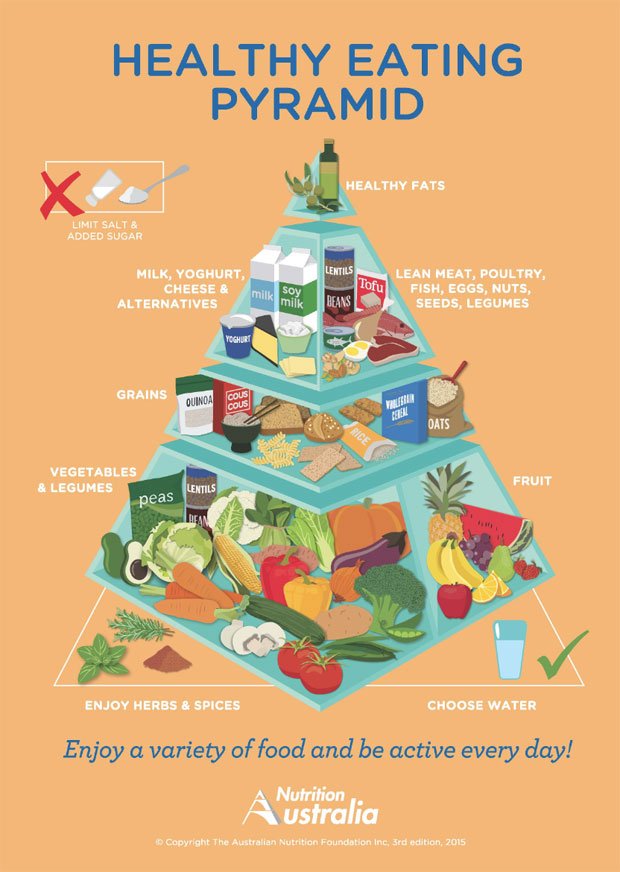 Nutrition Australia first developed the Healthy Eating Pyramid in 1980 based on the eat more or eat less concept.

Senior Nutritionist from Nutrition Australia Aloysa Hourigan told 4BC the biggest difference between the pyramids are "the further separation of the five food groups."

For Dr McMillan, two things about the pyramid stand out.

In the old pyramid we had green vegetables, nuts, legumes, fruit and grains all clumped together on the bottom.

"It's much more helpful to have vegetables including legumes, with fruits, at the bottom to show that these are the foods you want to be filling half your plate with," says Dr McMillan.

"I like that they've put grains the next level up so people can see that fruits and vegetables [should be] making up the bulk of your diet."

Dietitian for Food & Nutrition Australia, Sharon Natoli said, that by separating grains out into the middle of the pyramid, it highlights them as a core food group.

"It's important that people know they are a good group to eat every day… As long as you are eating whole grains," says Natoli who is also the spokesperson for Australian Eggs.

The other message Dr McMillan says she likes about the new pyramid is the removal of sugar.

"I like that [sugar] is pulled out and it's very clear that refined sugar and salt are the two things to cut back on and I think that's much more helpful to have that out of the pyramid."

"That's a much more positive move than the way it was before, where it lumped fats which are really fabulous, like olive oil, in with limited sugars and processed fats," says Dr McMillan.

"It teaches people what the correct balance between these different food groups is."

Use the interactive Healthy Eating Pyramid above to find out the recommended serves per day for children according to the 2013 Australian Dietary guidelines.